Adrian James – The man in the shadow & our most consistent performer …

Most of us will know “Ady” as the committed, passionate 1st XI scorer but this week he spoke to us about how he fell in love with game and the circumstances around starting his 33 year (& counting) journey of scoring for South Wilts CC ….

Have you always liked cricket? 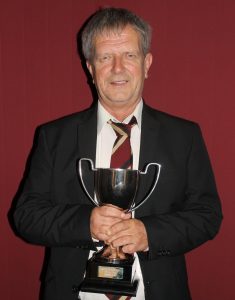 AJ – Not really, I didn’t look forward to it at school as I was no bloody good at it. It was only really when I started scoring that I fell in love with the game and South Wilts.

How did you get into scoring?

AJ – My brother used to umpire for the club second team and one day in 1986 they were short of a scorer so I got roped into scoring for them by my brother and Dave Heather who was captain at the time.

Did you know how to score?

AJ – I knew the basics from when we were younger and mucking about with a couple of lads. They used to play cricket between themselves and I used to try and score for them.

Did you ever play Cricket?

Only at school, I wasn’t very good..

When did you join the club officially?

AJ – After that first game in 1986, I scored every weekend for the second team for three and a half years before I took over the first team when Wilf (Heather) sadly passed away.

Have you ever missed a game?

AJ – I think I’ve missed two full games, both after I left B&Q and worked in a garage for a month. I couldn’t get the Saturdays off, it didn’t last long! Oh, and I missed a game last year.

In fairness, you did only missed the last bit of that game.

AJ – Yes, that’s right. We won though, Cranchy and Raff saw us home. I remember the first question I asked was ‘did we win’. That news cheered me up.

You’ve worked nights for most of your career haven’t you? How did you balance that with scoring all weekend?

AJ – Only 14 years, from 2004 to 2018. It was hard work at times, I felt myself drifting and the concentration going but just about managed it. I never bothered having a nap when I got in from work, used to get ready and get off to the meeting place.

What’s been your favourite moment in your 33 years scoring for South Wilts? Hopefully there’s been a few highlights …

AJ – Hmm, too many to list. I enjoyed our win against Burridge at the Ageas Bowl under lights in 2012. I’ve also enjoyed watching a few of Tom’s (Morton) big hundreds over the past decade.

Rumour has it that you have a set of rules for opposition scorers in the box? Any truth in this?

AJ – (laughs) they weren’t mine, they are rules that Mr (Tom) Morton drew up. I don’t disagree with the rules though.

Who’s been the best overseas player?

AJ – I think it would have to be a chap called Angus Small in 1990. A South African bowler, he was bloody quick, scared the s*** out of most batsman. Alan Kruger was a good cricketer too in 2004.

Ever been to The Chapel Nightclub?

AJ – Once, when we won the Southern League Cup at the Rose Bowl in 2004 I think. Adam Smith was playing and he dropped me on my head in the Chapel. That was the only time I’ve been in there.

Obviously you like all the opposition scorers but do you have a favourite?

AJ – Most of them yes, I don’t have a specific favourite but I always prefer the female scorers – they tend to be better company and better scorers.

Your favourite ground? Other than South Wilts of course.

AJ – St Cross I think, it’s just a picturesque ground with good facilities and you can watch in comfort from anywhere.

Are you a fan of club cricket being played in coloured clothing and white ball?

AJ – Umm, if I was honest I’d probably say no. I’m a bit of a traditionalist and it seems a bit of a circus to me, it’s not the way it should be. Maybe I’m a bit old fashioned.

Away from cricket, do you have any hobbies?

AJ – I try and play snooker, apart from that then no real hobbies. I’m a bit of a boring old fart.

What are you doing with your time with no cricket?

AJ – Trying to sort the garden, which is hard work. I’m also doing jigsaw puzzles, I’ve done about 10 so far.