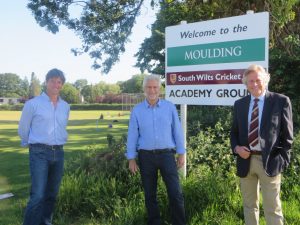 Despite the continued absence of any cricket at Bemerton this summer due to the Covid-19 pandemic lockdown, Mouldings – the region’s largest and longest standing traditional building company – have extended their sponsorship, with a four-figure sum going into the club’s ailing coffers.
Mouldings’ continued backing could hardly have come at a more opportune time with South Wilts forecasting a conservative loss in excess of £10,000 on the season.
Eight rounds of Southern Premier and Hampshire League cricket have already been lost, with the cancellation of Wiltshire’s potentially money spinning 50-over match against Gloucestershire on July 23 another blow.
“We were hoping to do a lot of corporate hospitality that day, but its another blank in the sporting diary,” sighed South Wilts chairman Rob Wade.
“But Mouldings’ have been simply wonderful. To continue to back us when there has been no cricket is simply superb.
“Their backing – along with that of our other vice-presidents – could not have come at a more appropriate time. It’s been a blessing.”
Fond memories
The Moulding family has enjoyed a long association with South Wilts cricket – company chairman Bill Moulding having played for the Wilton Road club as a batsman/wicketkeeper for some 30 seasons, including the 1990 Southern League championship triumph.
Nephew Tim, managing director of the firm, joined South Wilts as a colt, playing first team cricket before moving to nearby South Newton, who sadly disbanded several seasons ago.
Tim has fond memories of one match he played at Lymington.
“I got a fifty and then was lucky enough to get four wickets – after which Peter Tapper (who has subsequently joined South Wilts) awarded me a hamburger as man-of-the-match,” he laughed.
Discussing the company’s continued backing, Tim added: “All of us at Mouldings are very proud to be the main sponsor of South Wilts for the ninth consecutive year. During this time, the 1st XI have won the league on four occasions and the second team achieved three separate promotions
“As with all cricket clubs across the nation, the current crisis has placed extraordinary pressure on funds. We are delighted to be able to provide some modest help during this very challenging time.”